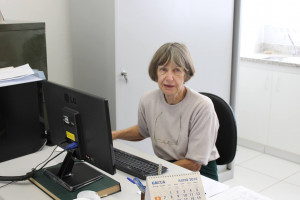 A new species of Cymbiapophysa Gabriel & Sherwood, 2020 from Colombia and a transfer from Proshapalopus Mello-Leitão, 1923 (Araneae: Theraphosidae)

The taxonomic history of Bumba Pérez-Miles, Bonaldo & Miglio, 2014 is mainly based on the inclusion of the new species. Bumba have been characterized by the type IV urticating setae present, retrolateral process on male palpal tibia, palpal bulb resting in a ventral distal excavation of palpal tibia, metatarsus I passes between the two branches of tibial apophysis when flexed, presence of spiniform setae on prolateral and retrolateral sides of maxillae and coxae I-IV. In this paper we include the row of teeth (denticulate row) in the median region of the inferior prolateral keel in all male palps. This structure range from a residual tooth to a ridge of up to five teeth. Both, the denticulate row and the retrolateral process on male palpal tibia in males could be considered as putative synapomorphies for Bumba. Here, Homoeomma humile Vellard, 1924 is transferred to Bumba and redescribed, while the female is described for the first time. Bumba cabocla (Pérez-Miles, 2000) is synonymyzed with B. horrida (Schmidt, 1994). Bumba pulcherrimaklaasi (Schmidt, 1991) is transferred to Cyclosternum Ausserer, 1871. Four new species are described and illustrated: Bumba tapajos sp. nov. from state of Pará, Bumba cuiaba sp. nov. and Bumba rondonia sp. nov., both from states of Rondônia and Mato Grosso, respectively, and Bumba mineiros sp. nov. from Paraguay and the Brazilian states of Goiás, Mato Grosso and Mato Grosso do Sul. Diagnosis of B. horrida and B. lennoni are extended and figures of this species are presented.

Studies on Neotropical Fauna and Environment, 2015

A new species of Tmesiphantes (Araneae, Theraphosidae) from the state of Pará, Brazil

A new species of Tmesiphantes Simon, 1892, T. aridai sp. nov., is described and illustrated based on three males and three females collected at the Floresta Nacional do Tapajós, Santarém, state of Pará, Brazil. Males can be distinguished from T. perp Guadanucci & Silva, 2012 by the palpal bulb with an inconspicous tegular basal projection, but presenting a very slender embolus with shorter keels not extending to the tip, and from T. nubilus Simon, 1892 by the tibial apophysis with two similarly sized branches, the prolateral one with a strong spine on the retrolateral margin. Females resemble T. nubilus by the aspect of the seminal receptacle but the constriction near the apex is less evident and apex shape is irregular. The new species represents the first record of Tmesiphantes from the Amazonian region, bringing the total number of species to eight.

On the Brazilian Amazonian species of Acanthoscurria (Araneae: Theraphosidae)

In this study the Brazilian Amazonian species of Acanthoscurria Ausserer, 1871 are redescribed: A. geniculata (C.L. Koch, 1841), A. tarda Pocock, 1903, A. juruenicola Mello-Leitão, 1923, A. theraphosoides (Doleschall, 1871). Acanthoscurria simoensi Vol, 2000 and A. insubtilis Simon, 1892, previously known from French Guyana and Bolivia, respectively, are recorded for Brazil by the first time. The females of these two species are described for the first time and a new species, A. belterrensis sp. nov., is described from Belterra, Pará, Brazil. In addition, four synonymies are established: A. transamazonica Piza, 1972 as junior synonym of A. geniculata; A. ferina Simon, 1892 and A. brocklehursti F.O.P.-Cambridge, 1896 of A. theraphosoides; and A. xinguensis Timotheo da Costa, 1960 of A. juruenicola. Acanthoscurria belterrensis sp. nov. resembles A. gomesiana Mello-Leitão, 1923 by the color pattern and structure of sexual organs. The male can be distinguished by the less curved embolus and the very projected prolateral superior and prolateral inferior keels, giving a triangular aspect to the basis of embolus, and the female seminal receptacles presenting a larger and narrower basis.

A new genus, Catanduba, is proposed and supported on the cladistic analysis with the following synapomorphies: embolus tapering abruptly from half of the length, embolus tooth associated with PIK and a triangular basal nodule on male metatarsus I. Homoeomma simoni and Plesiopelma flavohirtum are transferred to Catanduba and five new species are described: C. tuskae, C. araguaia, C. piauiensis, C. canabrava and C. peruacu. The species occur mainly in central Brazil, in Cerrado areas, with some species also occurring in Atlantic forest (C. tuskae sp. n. ) and Caatinga (C. piauiensis sp. n. and C. peruacu sp. n.).

Redescription and notes on the natural history of the arboreal tarantula Iridopelma seladonium (Araneae: Theraphosidae: Aviculariinae)

The original description of this species was based on a single female and no illustrations of reproductive organs were presented. After we collected several specimens identified as I. seladonium, we decided to redescribe this species and discovered that the male, previously described as belonging to this species, was misidentified by MELLO LEITÃO (1923). Thus, in this paper the male of I. seladonium is newly described and the reproductive organs of male and female are described and illustrated in detail. Notes on the behavior and natural history of I. seladonium are presented based on the observation of live specimens in the field and in captivity. An immature of I. seladonium was observed constructing a hinged retreat with silk and little pieces of bark, a behavior not previously seen for other Aviculariinae. Two courtship events were observed and photographed, leg tapping and palpal drumming of the male on female's body and dorsum-ventral movements of the female's abdomen while the male was inserting the embolus were documented to Aviculariinae for the first time. The courtships and mating lasted almost two minutes.

The genus Magulla Simon 1892 is revalidated and redescribed. The female of the type species M. obesa Simon 1892 is redescribed and the male is described for the first time. Magulla janeirus (Keyserling 1891) is considered a valid species. Magulla symmetrica Bucherl 1949 is transferred to Plesiopelma Pocock 1901, and considered a junior synonym of P. insulare (Mello-Leitao 1923). Additionally, two new species are described from Brazil: M. buecherli n. sp. from Ilhabela, Sao Paulo and M. brescoviti n. sp. from Sao Francisco de Paula, Rio Grande do Sul.

The genus Guyruita gen. nov. and two new species from Brazil are described. Holothele waikoshiemi (Bertani & Araújo, 2005) from Venezuela is transferred here to the new genus. Guyruita gen. nov. differs from the remaining Ischnocolinae by the following features: labium densely occupied by a lot of cuspules (more than 100), intercheliceral intumescence absent, posterior sternal sigilla remote from margin, tarsal claws without teeth, tarsal scopula I-II undivided (tarsus II with a line of sparse setae, which does not divide the scopula), III-IV divided.

A new species of the genus Ephebopus Simon, 1892, E. uatuman, is described from the Amazonean Region of Brazil. Concerning E. violaceus Mello Leitao, 1930, type misplaced or lost despite registered in the Arachnological Collection of the Museu Nacional do Rio de Janeiro, Brazil, we conclude, after the short description of the author, that this species exhibit characteristics of the genus Avicularia, since the first ocular row is very procurve. The total length of only 23mm, the design on the dorsal side of the abdomen and the division of the posterior tarsal scopulae suggests that the specimen is a juvenile. Therfore two are the Brazilian species of the genus Ephebopus: E. murinus and E. uatuman.