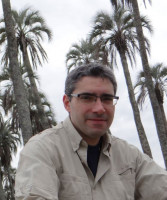 My work focuses on Taxonomy, Systematics, Biogeography, Ecology and Ethology of mygalomorph spiders from Argentina. Im currently working with phylogeographic patterns and modelling species distribution of the Mygalomorphae from the mountanious systems in central Argentina.

The Neotropical genus Hapalotremus Simon, 1903 (Araneae: Theraphosidae), with the description of seven new species and the highest altitude record for the family

New specimens of the genus Hapalotremus (Theraphosinae) are revised based on the examination of types and additional material collected in Argentina, Bolivia and Peru. A new generic diagnosis is proposed. New information and illustrations are provided for known species and seven new species were recognized and are newly described and illustrated. Hence, Hapalotremus comprises 10 valid species, distributed along the Andes and Yungas in western South America. All species are keyed and mapped. New taxonomic features are included in the descriptions and the detail of embolus keels morphology and positions are described for the first time for the genus. Information on species habitat is included. The highest altitude record for a Theraphosidae spider, living at 4524 m above sea level, is reported.

Acanthoscurria sacsayhuaman sp. nov. (Araneae: Theraphosidae) is described based on a male from Cusco, Peru. The new species is characterized by the absence of stridulatory bristles on retrolateral face of palpal trochanter. Moreover, it can be distinguished by morphology of the male palpal bulb and tibial apophysis of the first pair of legs. The genus is recorded for the first time for Peru.

A new species of Phrixotrichus Simon, 1889, P. pucara sp. nov., is described and illustrated based on a male from Pucará river, Neuquén province, Argentina. Male can be distinguished from all other species of the genus by the presence of a long strong spine on inner face of prolateral branch of tibial apophysis; also, it differs from P. scrofa (Molina, 1788) and P. vulpinus (Karsch, 1880) by a serrated prolateral keel of the male palpal bulb. Male resembles P. jara Perafán & Pérez-Miles, 2014 but can be distinguished by the uniform color on dorsal cephalothorax and by the palpal organ morphology being wider on the bulb base and embolus shorter and thicker, with the tip of embolus not so directed retrolaterally and prolateral keel bearing a serrated edge with three teeth. Additionally, P. vulpinus is reported for the first time for Argentina along with new distributional data.

First record of Vitalius longisternalis Bertani, 2001 (Araneae, Theraphosidae) in Argentina and notes on its natural history in Misiones province

This is the first record for the tarantula Vitalius longisternalis Bertani, 2001 in Parana and Araucaria Forests, Misiones province, northeastern Argentina. Specimens were found at Iguazú National Park and Urugua-í Wildlife Reserve. Data on its natural history is provided.

Two new species of Plesiopelma Pocock, 1901 from northern Argentina are described and diagnosed based on males and habitat descriptions are presented. Males of Plesiopelma paganoi sp. nov. differ from most of species by the absence of spiniform setae on the retrolateral face of cymbium, aspect of the palpal bulb. Plesiopelma aspidosperma sp. nov. differs from most species of the genus by the presence of spiniform setae on the retrolateral face of cymbium and it can be distinguished from P. myodes Pocock, 1901, P. longisternale (Schiapelli & Gerschman, 1942) and P. rectimanum (Mello-Leitão, 1923) by the separated palpal bulb keels and basal nodule of metatarsus I very developed. It differs from P. minense (Mello-Leitão, 1943) by the shape of the palpal bulb and basal nodule on metatarsus I well developed. Specimens were captured in Salta province, Argentina, inhabiting high cloud forests of Yungas eco-region.

A new species of Eupalaestrus Pocock, 1901 from northern Argentina is described and illustrated. Males and females of Eupalaestrus larae sp. nov. differ from those all other species of the genus by the color with distinct two parallel longitudinal stripes on the femora, patellae, tibiae and one longitudinal stripe reaching half of metatarsi; the presence of a thickened femur and tibia IV; a straight embolus of the male palpal bulb and retrolateral keel pronounced. Specimens were captured in Chaco province, inhabiting unflooded flat grasslands open areas inside forest in transitional Chaco eco-region.