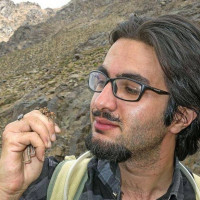 I have been interested in spiders ever since I can remember: I recall spending most of my childhood collecting and rearing different species of spiders from our garden in Tehran, reading upon their life styles and watching wildlife documentaries, especially, one in particular from the Canadian tarantula (=Theraphosidae) expert Rick C. West, which inspired me to pursue arachnology. It was during my time in the elementary school that I’ve made my first “discovery”, which was the collecting of a recluse spider (Sicariidae: Loxosceles) from our home. A thorough search in the internet and emailing Iranian zoologists lead to the conclusion that this species was indeed, not recorded from Iran before. Although I was excited with my “discovery”, of course, I wasn’t able to identify the species during that time, and the specimen was preserved and left in my closet for several years.

During my High School, my fascination with spiders continued to grow more than ever: I was able to obtain my first tarantula (Rosalind, a female Grammostola rosea) and under the influence of my High School biology teacher Mr. Omid Rahnamay, decided to study Animal Biology at the University of Tehran. During the early weeks of my studies at the University, I was able to use the laboratory equipment to identify my “mysterious” recluse spider as Loxosceles rufescens, and published the results by the end of my second semester. This first small contribution inspired me to become more serious with the documentation of the Iranian spider fauna. During my bachelor period, I was able to participate and conduct several expeditions, record over a hundred new taxa for the fauna of Iran and describe several new species, which earned me the great honor of being the youngest Iranian in the history with an author citation in Zoology. It was also during this time that I started to write a book, “The Field Guide of Spiders and Scorpions of Iran”, which is the first field guide devoted to the arachnids of the Middle East. After earning my bachelor’s degree, I continued my studying at the University of Tehran for my M.Sc. degree, with my thesis focusing on the taxonomy of the long-tailed ground spiders (Gnaphosidae: Pterotricha). During this time, I also became interested in amblypygids (a group of arachnids closely related to spiders), and co-described the first member of this Order from Iran, namely Phrynichus persicus.

Currently, I am busy conducting or participating in more expeditions in remote areas of Iran in search of new arachnid species, documenting their distribution and ecological traits and working on their conservation. Also, I am continuing my other goal regarding the public awareness of spiders and other arachnids, the results of which have been very promising.

Taxonomy of the genus Ischnocolus in the Middle East, with description of a new species from Oman and Iran (Araneae: Theraphosidae)

Spider material collected from Oman and Iran revealed a new species of the genus Ischnocolus Ausserer, 1871, which is described as I. vanandelae sp. n. New records of I. jickelii L. Koch, 1875 from Saudi Arabia, Yemen and United Arab Emirates show a larger distribution of this species than previously known. The natural history of I. vanandelae sp. n. and I. jickelii is described and the rather unusual colour polymorphism of the latter is discussed. The genus now includes eight species, whose distribution is mapped.

Zoology in the Middle East